A Tango Institution in Boedo

On the corner where Avenida Boedo meets Avenida San Juan in the Southern, Bohemian barrio of Boedo, you will find a homage to one of tango’s most important lyricists: Homero Manzi.

Dubbed “Esquina Homero Manzi,” it is one of several famed “Esquinas de Boedo”—classic corners harboring historic bars, cheery confiterías, and old-fashioned ice-cream shops—and  certainly its most popular.  Bedecked with bronze plaques crowded around saloon-style double doors that loudly proclaim its historic status, it is clear that something important happened here, and whatever it is has something to do with Homero Manzi and the tango.

If you venture inside and take a seat at one of the many striking marble-topped, mahogany-rimmed tables and ask for “una carta” (a menu), you will quickly learn that that something has to do with a famous tango called “Sur”, scrawled out by Manzi some afternoon in the year 1948 while sitting at just such a table (maybe yours?), and whose lyrics are conspicuously printed on the back.

The obvious presumption, given the lack of further explanation, is that you will glean immediately why this was such an iconic song in tango history, deserving of the lofty descriptions emblazoned on the other side of the door: Poeta fundamental del tango (fundamental tango poet), who retrató a Buenos Aires como ninguno y en cada verso puso su corazón (portrayed Buenos Aires like no other and put his heart in every verse).

Except that this is probably not the case.  If you were sitting there right now, you would probably be sipping from your $5 cup of coffee and wondering, “Who the heck is this guy Homero?” and “What the heck do these lyrics even mean?” on top of the obvious “What the heck could possibly justify the price tag on this cup of coffee?!” 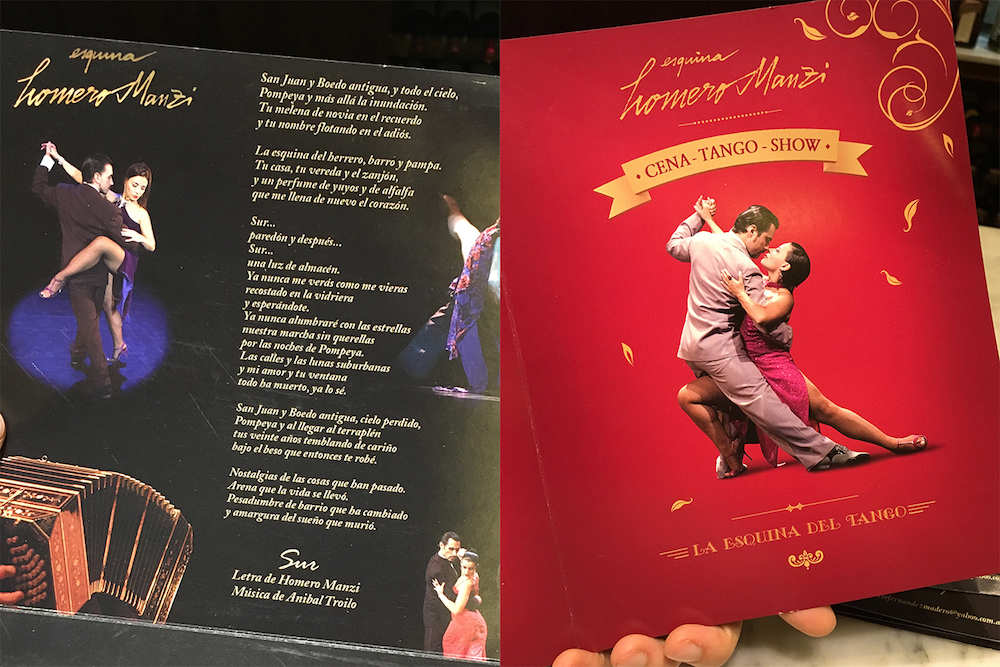 This article, dear reader, is one tanguera’s attempt to answer those questions for you.  First, let’s review the facts:

And that’s where the story ends for most folks: juicy steaks, choreographed tango numbers, glitzy costumes, expensive coffee… and still no idea why this place is so significant in the world of tango. 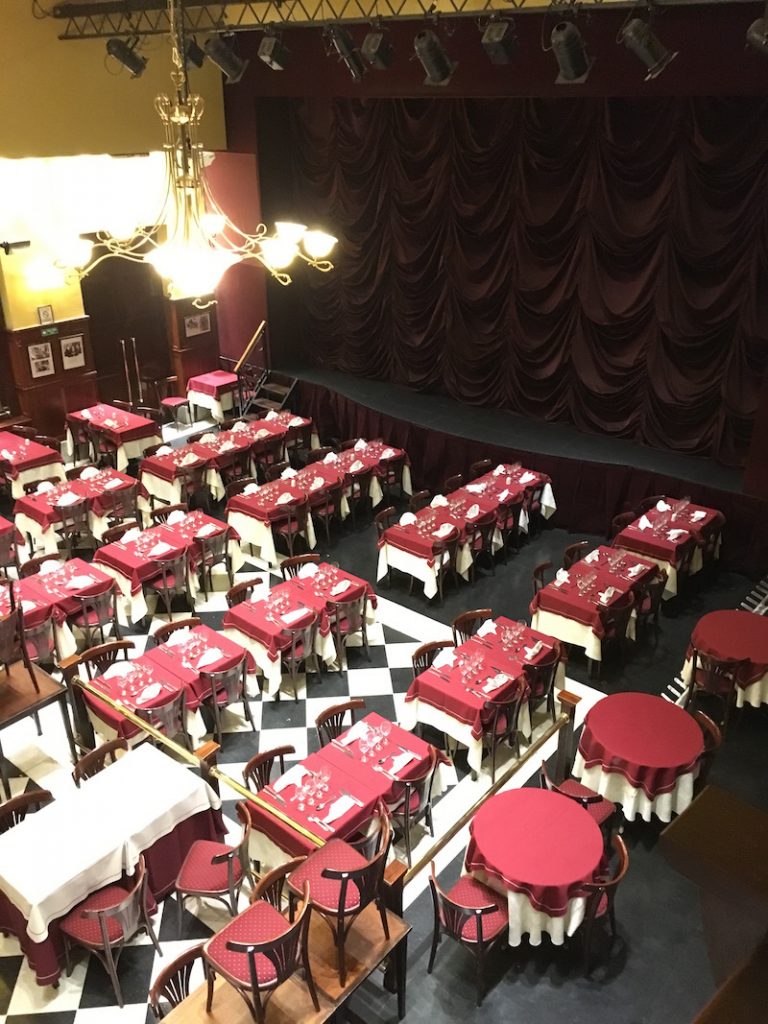 Just as no question worth asking in the world of tango has a simple, straightforward answer, the real reasons behind the almost mythical status assigned to this cherished corner are multifold.  Let’s start with the easy one…

Boedo is one of those neighborhoods that tango poets would refer to as an arrabal which, in the street language of lunfardo, affectionately refers to a working-class neighborhood on the outskirts of the city.

These neighborhoods, which include the likes of neighboring San Cristóbal, Chacabuco, and Caballito, are spoken of fondly by tango lyricists as capturing the spiritual heart of the main protagonists of all tango music—the humble dock worker or bricklayer that built the city, piece by labored piece, but now succumbs to the financial and social oppression heaped on him by the aristocratic class (who, of course, reject both him and his favorite dance as coarse and vulgar).

The junction of Avenidas San Juan and Boedo, furthermore, represents the meeting place of the two main transport arteries of the neighborhood, with the latter being the “main strip” and the street where you will find other notable bars like Cafe Osvaldo Pugliese and Café Margot.  This corner is so infamous for representing the cultural center of Boedo that it was immortalized in at least one other tango besides “Sur”— that of “Boedo y San Juan”, written by Enrique Cadícamo (1943).  In it, he laments leaving the barrio “where I left all the feelings of my childhood” but which has now “changed so much” upon his return as an old man.  Which brings us to our next theme…

El Sur: The Heart of the South

The concept of the “South” holds a special place in the porteño heart. Not only do we have the obvious connotation of the “America of the South,” but we can also point to the birthplace of tango in the La Boca district to the South of the city, and the tension between it and the capitalistic excesses of the wealthy “Barrio Norte” residents that shunned the tango.

Everywhere you look in tango, the “South” is a birthplace, an origin-story; a place of tradition and family and childhood memories that cannot be recaptured (although you might desperately try).  It is the home of the working man, and the mother he left behind (the “mother as saint” theme looms large in tango).

So ubiquitous is this concept that, all told, there are no less than 28 tango songs that have “Sur” somewhere in their title!

Manzi: A Man of Character

For the next piece of the puzzle, let’s look at Manzi himself.  Born outside the capital city and thus having rural, provincial origins, young Homero came to Buenos Aires at the age of 9 and spent his youth wandering the streets of Boedo, enduring his first artistic triumphs and romantic heartbreaks there.  The café that is the subject of this article, then, was ground zero for his childhood.

Day after day of his tragically short life (he died of cancer as a young man), the locals would witness him faithfully composing his tangos there by recounting his experiences from the surrounding streets in a way that exposed how openly he “danced” with the world around him.  He came to be seen as a man of good character who loved his country, worked hard, and like any good tanguero, let his people (partners) fully into his heart.  And there’s nothing dearer to the soul of a dancer than a connected partner!

Anibal “Pichuco” Troilo was the musical counterpart to Manzi’s later literary masterpieces, including “Sur.”  Regarded as the most accomplished bandoneón player in Argentina—the instrument that became synonymous with tango—Anibal was adored by social dancers for writing music that was fun to dance to.  Not only that, he brought an upbeat, optimistic spirit to a dance that was plagued early on by hopeless-sounding melancholic compositions that didn’t resonate well with the spirit of the 1940’s.

The man himself was an arrabalero of Balvanera, a neighboring barrio to Boedo, who never ventured beyond the boundaries of his beloved Buenos Aires.  His jovial spirit was infectious and, when combined with Manzi’s heart-piercing arrangements, produced one of the most important themes in tango: mufarse.

Early tango compositions and their sense of disconsolate despair, as previously mentioned, were not going over very well in tango’s Golden Age.  Gardel had just succeeded in wrestling tango away from its undeserved reputation as the “dance of the brothels,” winning it a much wider acceptance and audience in the middle and upper classes before his death in 1935.  The country was getting rich (at least, some were), and enjoying the privileges of its increasing wealth.  All of this amounted to the desire to celebrate, but not in that superficial way that denies the existence of pain or heartache.  Rather, people sought an excuse to both acknowledge their suffering and highlight their joy; that contradictory mix of emotions that is well-known by every tango dancer and felt during every tanda.

Enter mufarse, the tango term for what is experienced when you take a step back to view the great landscape of your life and finally come to terms with the fact that your greatest sorrows have led to your greatest joys, and vice versa.  The essence of mufarse is sitting in a café and remembering a lost love, but with a sense of bittersweet gratitude that is to be savored alongside a glass of Malbec.

It doesn’t get more tango than that, folks.  What’s more, this important theme never would have existed without the fateful collaboration of Manzi and Sebastián Piana, the composer and piano player that Homero befriended early in life and who musically represented Manzi’s strong grasp of mufarse to perfection, even before there was a word for it.  This new style reinvigorated an audience that was hungry for sassy, spirited rhythms and created a Renaissance in the milonga sound (hence Piana’s praise as “Creador de la Milonga Porteña” on the plaques outside).

Now, back to that famous tango…

With all that background under your belt, you are now in a position to understand and appreciate why “Sur” took on the significance it did.  Here is an excellent English translation, courtesy of tango historian, DJ, and dancer Derrick Del Pilar.  If you read through it, you will see that it is infused with all of the concepts we have covered above.

Starting out by mentioning the infamous corner of “San Juan and Boedo,” it proceeds to depict how losing a love gets entangled with the changing face of a neighborhood, as told through some of its famous landmarks including “Pompeya” (the neighborhood directly to the South of Boedo) and “the railway crossing” that lays on the border between the two. Have you ever experienced a place not looking or feeling the same after losing a person you shared it with?

Flashes of imagery like the “blacksmith’s corner, mud and pampa, your house, your sidewalk, and the big pit” are presented to you as memories flashing through the mind of an aching arrabalero from the South side.  This is nostalgia—the capital theme of tango—as longing for woman and world as it once was, squeezed out through the bellows under Troilo’s skillful fingers.

And sitting where all that was captured on paper, my friend, is worth every penny of the $5.

If you enjoyed learning about this infamous Esquina, consider signing up for a tour on a Thursday night, which will take you to a milonga just a few blocks away from this important tango landmark.  Also, like us on Facebook to keep up with all the tango happenings in Buenos Aires!

The 3 Types of Tango Music

Do you have trouble distinguishing between the different types of music played at a milonga? Start here!

Missed the festival this year? Catch all the highlights from the TangoTrips team!

Everything you ever wanted to know about the most important tango festival and competition in the world, and an overview of this year’s events!

TangoTrips is a way for visitors to experience Argentine tango in its natural habitat. Take a milonga tour with TangoTrips and you’ll discover the insider’s tango scene, and gain an understanding of the culture surrounding the dance that is integral to Argentina and its history.